What is the purpose of  yoga and how does it work?

What do we really want in our lives? If we analyze the answers, we will see that they all end in synonyms of “feeling good”.

If we could feel good no matter what, would we be afraid of anything?

Remember all those daily worries that have not come true, all the time spent thinking about them and everything that you have not done out of fear? If you could control how you feel, all that wouldn’t matter to you.

Can you imagine what an extraordinary life you would be leading? Without hiding anything, or being ashamed of anything and without having to prove anything to anyone or to ourselves. We would be exactly as we are, without the slightest pretense. Why change, if I already feel good about myself?

We would continue to have obligations, needs and desires, but we would face them in a joyous, optimistic and positive way, because our inner well being would not be at stake.

Why can’t we choose how we feel?

Because we act just the opposite of how we should. Although the most important thing happens inside us, we pay almost all our attention to what happens outside.

In other words, we react to the world based on the interpretation we make of the information provided by our senses, and these responses are largely compulsive.

We make a tremendous effort to “shape” our world in a way that makes us feel good, when in fact we have very little control over the millions of things that could go wrong.

That is essentially the cause of our insecurities, fears, stress etc.

What is 100% in our hands is choosing how we respond to what happens.

Mastering something involves knowing how it works

The solution is to get a deeper knowledge about “this thing” that we are, to improve control over the responses we produce.

For a few seconds try to stop thinking. Can you? – No.

You have not developed the technique or the discipline necessary to achieve it.

The way to achieve that control over what we think and feel, and thus access a state of deep peace and joy, is called YOGA.

“The way out is the way”

A bit of yogic history and philosophy.

Yoga is a spiritual practice thousands of years old. Traces dating back to 2000 BC have been found in northern India that refer to yoga.

The Vedas, one of the oldest books in existence, make the first written mention of yoga. Later, it was Patanjali who systematized his practice in the famous book “Yoga Sutras”.

Yoga is a word that is derived from the Sanskrit word “Yuj” which means “to unite” or “union”, and was developed as a means to achieve “liberation” or union with everything else.

Through this union or harmonization with life or cosmos, the individual reaches their maximum expression, develops their full potential and fulfils the purpose of their existence.

The science of yoga

The ancient yogis developed a deep introspection that led them to know the relationship between physical and mental processes and their balance with the environment.

The purpose of this process of observation is to realize that the body, the mind and everything else is united or connected by the same force, which they called prana.
Everything that exists, including prana, is energy in different states of vibration.

They discovered that the individual is made up of several bodies that they called koshas (layers), which are:

Note: The 5 khosas should not be understood as layers exiting within the physical realm, just outside the body. Each of them belongs to different dimensions of existence.

Yoga works with the “realities” that can be experienced, the body, the mind and the emotions and with the energy that gives them life.

In essence, the job of yoga is to harmonize the energy of the less subtle bodies (koshas) (body and mind) with that of the higher vibrations (vijananamaya and anandamaya)

The lack of harmonization has its main cause in the fears (resistance to reality) accumulated in the form of energy. These fears are continually fuelled by the tendency to protect ourselves and to anticipate the consequences of the risks that various life situations entail for our personality.

The reason we have that difficulty in mastering the mind, which seems to be always active jumping from one thing to another, is because that energy is there, acting, producing distortion and disharmony with the energy of the higher bodies of our being.

The difficulty that most people find in mental work has made the processes focus primarily on working with the body “asanas” and breathing “pranayama”, supported by meditation techniques. In reality everything is ONE, therefore any physical process has an effect on the mind and any mental process has an impact on the body.

It is possible to dominate the mind through the body.

Yoga produces an increase in energy that translates into an increase in consciousness, understood as a greater knowledge of who we are. The result of getting to know yourself better is control over what happens inside, going from compulsive reaction to conscious action.

The mind works at levels beyond our control, producing an energy that manifests itself, amongst other things,  as erratic and uncontrolled thoughts. The only way to improve is by being aware of those deep processes.

The increase in energy produced by yoga leads us to stably access a higher level of intelligence (vijnanamaya kosha).

The change in perspective produced by looking at the world from that level implies a better understanding of external and internal processes, which translates into: reduction of stress and anxiety = energetic harmony between all the bodies or levels of our being = reduction of mental noise = control = I choose to feel good = peace

Everyone relates feeling good, optimistic, positive with a high energy level along with feeling active. We also know that when we feel good and energetic, we are more efficient, and we resolve the situations we face in a better way.

The virtue of yoga lies in having systematized a process to raise the energetic state, that, in addition, works without the need to know its mechanisms.

Yogis and mystics from all ages and origins, who have “penetrated” that level, describe it as “indescribable” and can only articulate qualities of that state: deep peace, transcendence, clarity, unconditional and indiscriminate love *, nirvana.

* Only when we have nothing to lose, we can love unconditionally and indiscriminately.

Some say it means becoming one with God and others with life, the cosmos, existence.

That point of no return to the consciousness of separation, is what yogis call mukti or moksha. It is the purpose of yoga. It means liberation and involves reaching a state of self realization, of clarity or illumination. It is considered to be “the end of suffering”.

Diagram 2 represents the different koshas and the levels of “illumination”: 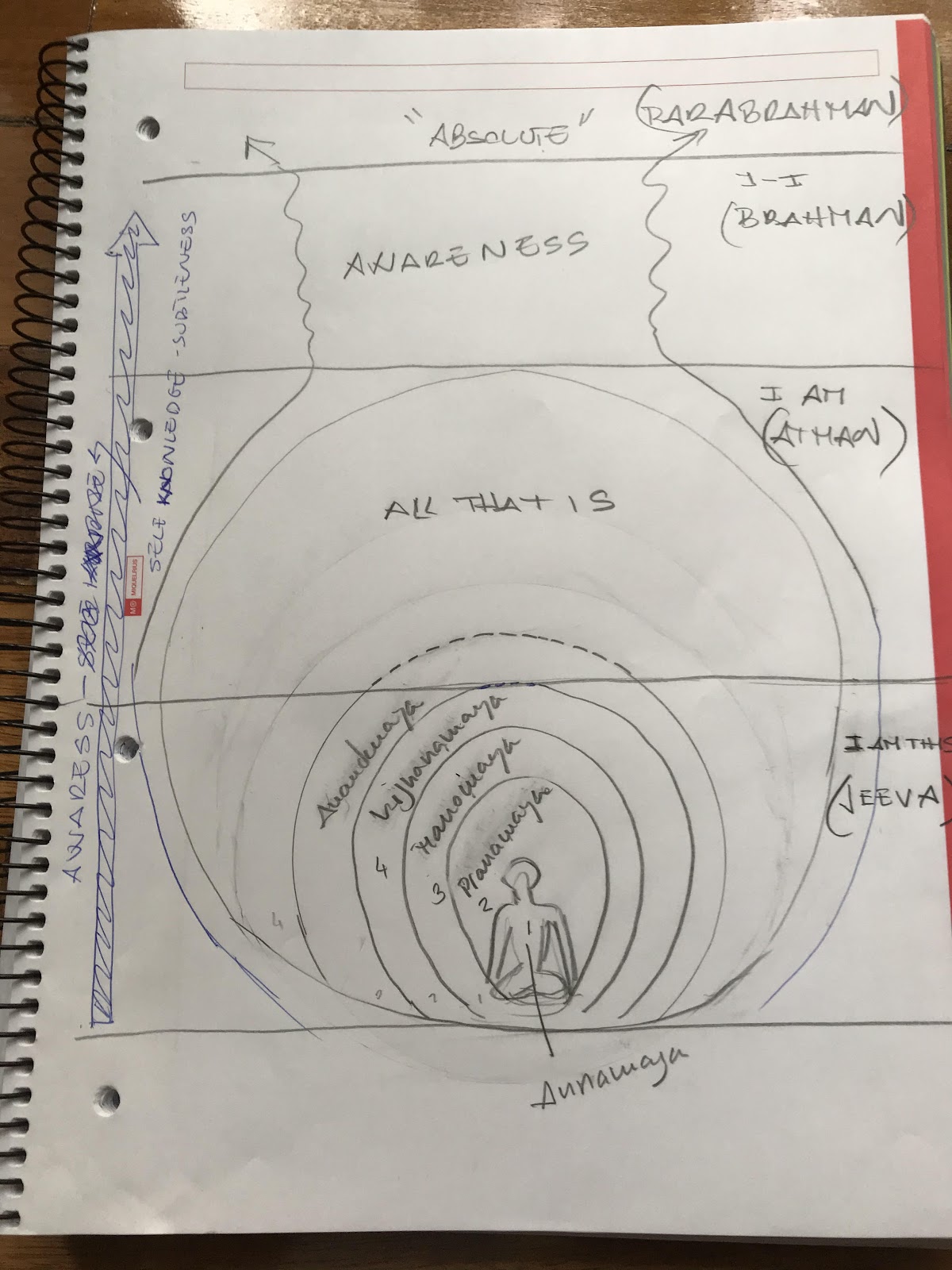 You do not have to become a mystic, or change your life, or believe in God or nirvana, or learn philosophy to access the benefits of yoga.

Yoga is a technique that works and benefits those who practice it. That is why it has more than 5,000 years of history and is so popular. There is no other process aimed at improving people’s lives that can say that.

People who achieve a high degree of self-control, through yoga or other processes, operate on all occasions with grace and freshness, saying or doing just what the situation requires. Consequently, they attract attention and become an inspiration for everyone, without even the slightest intention to do so.

This article is an invitation to get to know us better – The best way to serve the world.